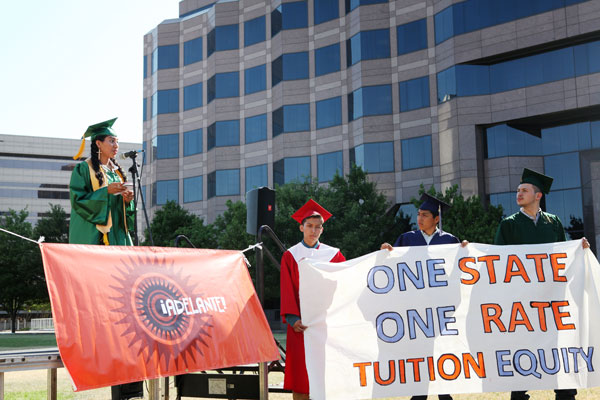 10 DACA recipient students in Georgia filed a lawsuit on Tuesday asking Georgia University’s board to give them in-state tuition rates. The same group of students filed a lawsuit in February of 2016, which was dismissed by the Georgia Supreme Court. The students claim they have legal status under DACA and thus are eligible for the cheaper instate college tuition fees.

Deferred Action for Childhood Arrivals, known as DACA, allows qualified immigrants under a certain age to obtain work permits and protection from deportation for a limited period of time. DACA has benefited more than 665,000 people in states such as California, Illinois and Texas, according to the American Immigration Council.

The Georgia Undocumented Youth Alliance posted on social media that it is suing all of 20 members of the Board of Regents, which is in-charge of the university system, hoping to sidestep the sovereign immunity laws that blocked their case the first time at the Supreme Court.

“We are bringing this action against the individual members of the Board of Regents for their failure to correctly implement their own rules on in-state tuition,” attorney Charles Kuck said in a statement to the Atlanta Journal-Constitution. “Justice, common sense and Georgia’s own economic self-interest all demand in-state tuition for DACA recipients. We will fight for this until we win. The hope of Georgia’s children is at stake.”

College tuition for Georgia residents is typically much cheaper for nonresidents. Normally a Georgia Resident pays $25,000 compared to $44,000 for an out-of-state student.

“My family has been paying [Georgia] taxes for the last 15 years,” plaintiff Maria Carrillo wrote in a message accompanying an online petition on the issue. “It is ridiculous that the Board of Regents continue to deny us entrance to universities that we have helped fund.”

More than 20 states have policies that consider undocumented immigrants as residents and provide them with in-state tuition rates, among them Colorado, Illinois, New Jersey and Washington.

You can learn more about DACA and its eligibility by clicking this link www.pottsmartinez.com/DACA.